Don’t miss your chance to wield the power of a legendary Guardian Dragon as this limited-time package bonus will only be available until February 4th! 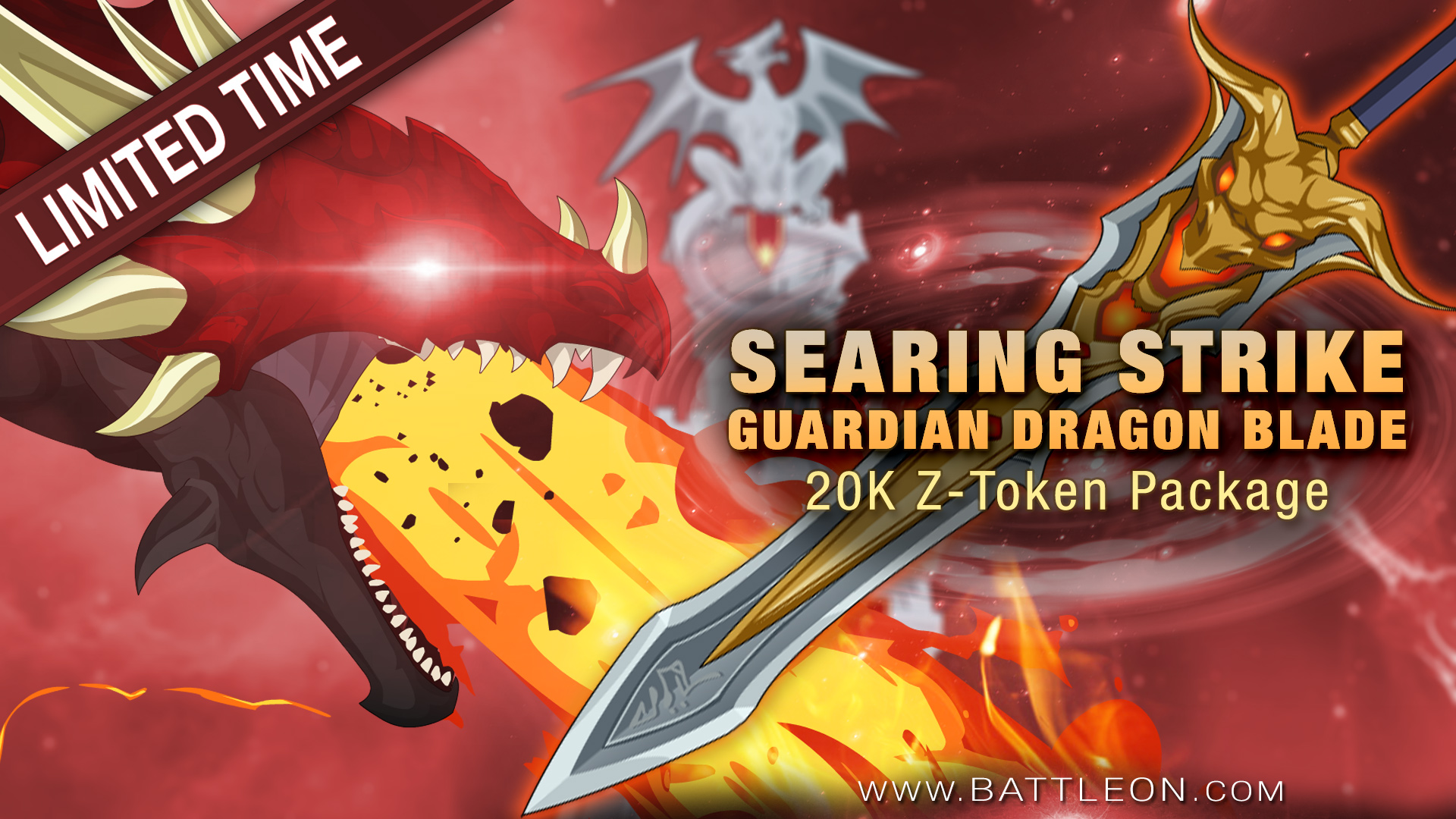 Ready to work with one of AQ's uh-mazing artists to create the ultimate player face? While Custom Faces may be purely cosmetic, you are going to score some serious style points! This Z-Token Package includes 150K Z-Tokens plus one Custom Face.

After your payment is complete, please email customface@battleon.com and make sure to include the following info.

Sharing in the Custom Face Shop:
After your new face has been delivered to your character's inventory, an exact copy of your face will be added to a special Custom Face Shop to show off your creation to other players - where they can purchase their own copy! Your face will include an "*" next to the name to mark you as the original creator, and also tagged as a Rare item.

*We cannot make anything copyrighted, but we can do an AQ version inspired by your idea ie. favorite character from a game or your favorite tv show.

50k Doomlight Shadowspark and Doomlight Eternal Sets:
As Champions of Doom, the Doomlight are able to return damage back to their enemies! These sinister Darkness and Energy packages feature all of these amazing items:

Grab these sinister sets while you can as they will only be available until January 4th! 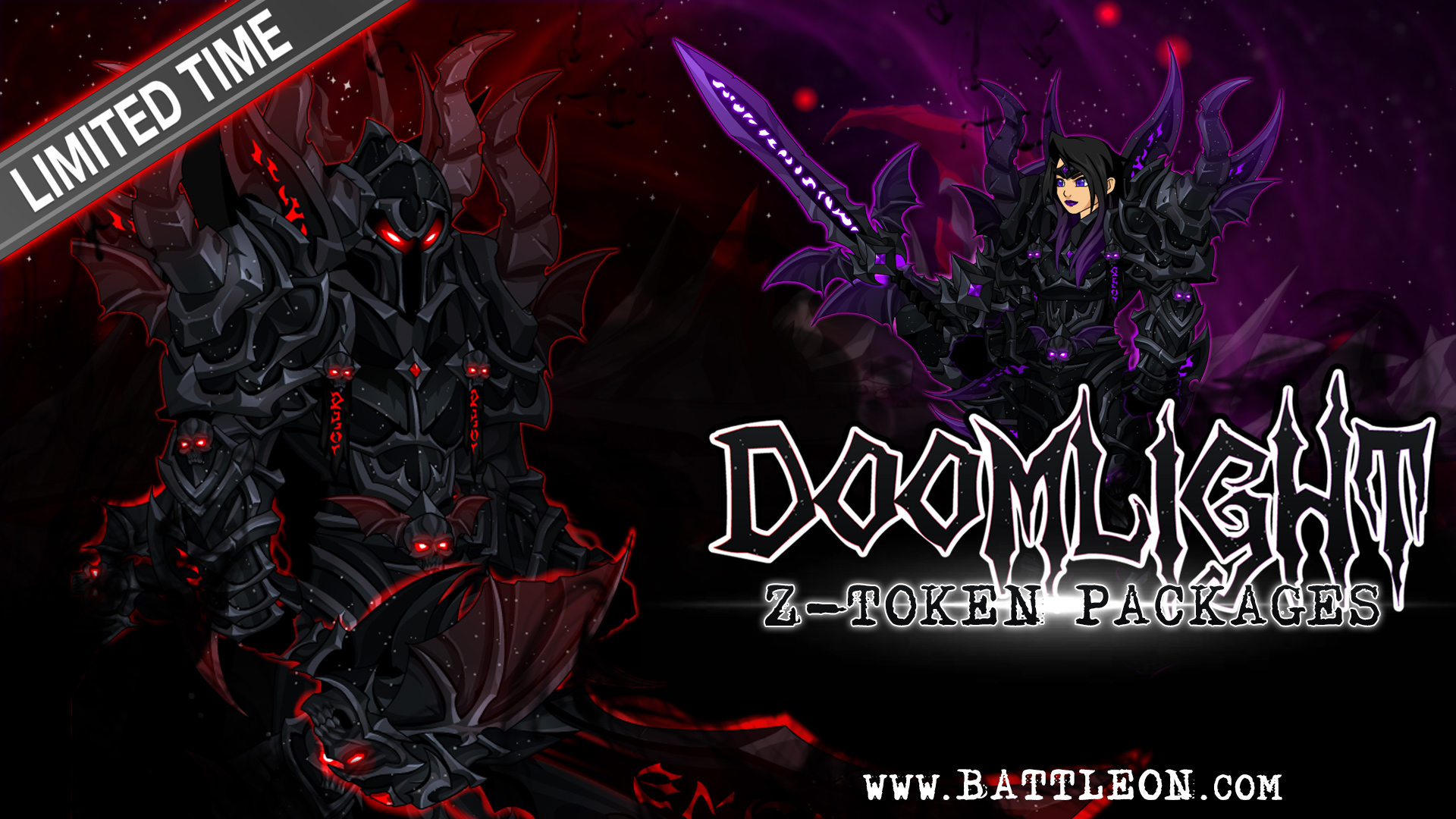 Labor Day Gold and XP Boosts:
Until September 8th, log in and gain a bonus 25% Gold and XP from battles! 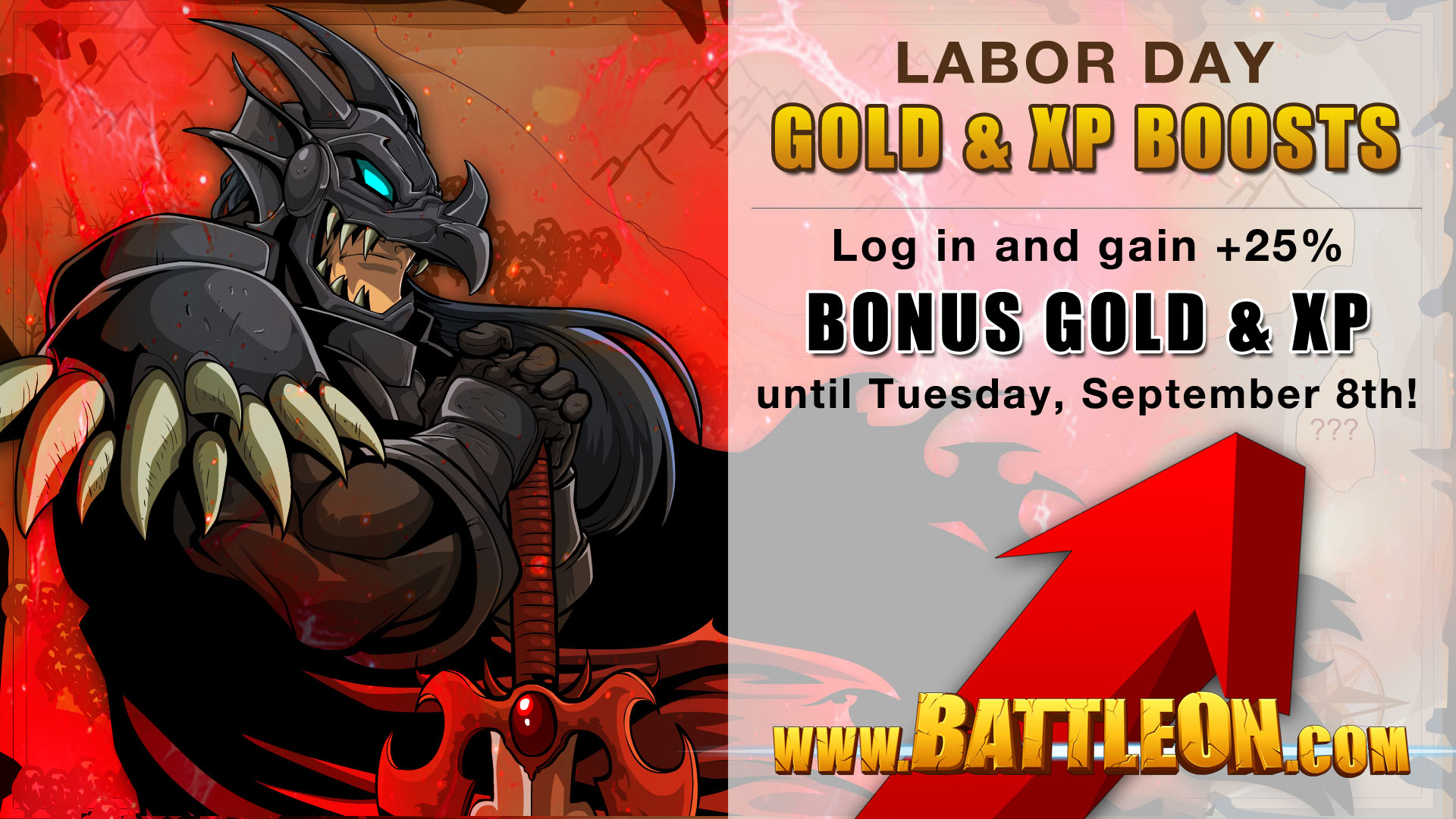 July Golden Giftboxes:
This month we have added 2 powerful sets to the Golden Giftboxes, PLUS the Blazing Infernal Legion Minion Guest! Blood Mages and Bloodzerkers are known for their prowess on the battlefield, sacrificing their own life energy to gain incredible power. Infernal Legion Minions dwell in deep regions of the Underrealm, and are said to only answer the call to serve the Legion's most devout members.

The Golden Developer's Ticket contest ends tonight 11:59 PM EST 7/16! We will select one lucky winner Friday the 17th that can redeem their ticket to create their own custom board design! We will contact the winner using the email listed on their account. So make sure your email is up-to-date! 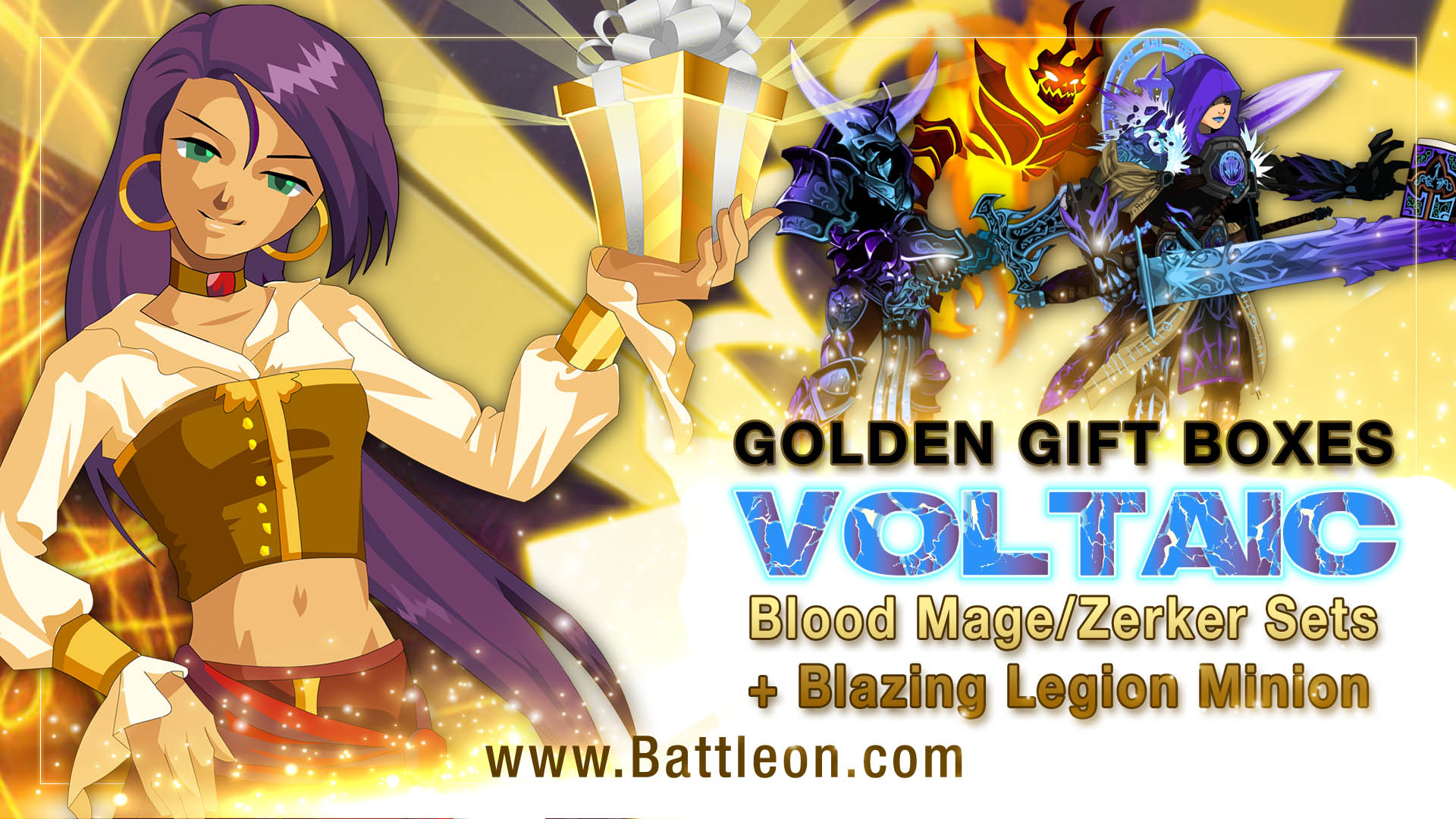 Z-Token Sale!
Extended until July 31st Z-Token packages give up to an extra 25% bonus Z-Tokens!

Hello, everyone! Kamui here with a balance update for everyone! This update is touching on a specific family of items that are getting a slight tweak and one very specific item that has been needing an adjustment for a very long time.

So first off, we have now added scaling code to all of the Poelala/Dunamis/Thernda pets/guests! In addition, these items haven't been quite performing exactly how we'd like, so there's a slight adjustment to how stats are used to influence the boost they give you. Before, you'd get half of the boost by default, 3/8 of the boost from either STR/INT/DEX (depending on if the pet/guest was Dunamis/Poelala/Thernda), and 1/8 of the boost from CHA. The stat boosts would be based on what your assumed STR/INT/DEX or CHA would be vs what we assume your stat to be at that level. Going forward from today, instead of a 3/8 and 1/8 split, the stat boosts will get a 2/8 and 2/8 split, so your damage boost from Poelala and her friends will be equally influenced by both STR/INT/DEX and CHA.

Second, the IronThorn shield has for a long time largely overperformed due to it giving x1.5 weapon/special damage for the paltry cost of only -10 BtH on weapon/special attacks and the "cost" of using a substandard shield. This effect was over three times as strong as what it should be giving considering what is sacrificed, so instead the IronThorn shield has been adjusted in the following ways. First off, it's being moved to Adder's shop on Isle d`Oriens. Second, it will no longer boost weapon damage just by being held; it is now an Earth shield that has a STR "drive" in it similar to the Celtic Wheel and Pie shields. Info subs for the new IronThorn shield are below. The Lv 75 and 100 versions of the existing shields have been updated to Lv 95 and 115, respectively.

We know this is a massive change for Iron Thorn, but it was a huge outlier, and frankly we shouldn't have let it sit idle as long as we did. We figure this will open up some diversity in builds, and players will actually have good reason to use something else other than this same shield. Thanks for your time, and look forward to the new Paladin quests!

Golden Developer Ticket - Surf's Up:
For every Golden Giftbox you open from 6/8 - 7/16 you will receive an entry to win a Golden Developer's Ticket. We will select one lucky winner that can redeem their ticket to create their own custom Board weapon! We will contact the winner using the email listed on their account. So make sure your email is up-to-date!

The winner will get to choose:

Coming Soon to a Lore Near You!

Now that the first day of the month is well out of the way, we can poke our heads out of the Loco bunker with approximately 87% less risk of brick pie in the face — And it's safe to make a post to touch base with all of you and share some big news!

The AQ team is committed to providing quality entertainment for everyone staying home, or returning home after a rough day. Whether you're a long-standing fan, a bright-eyed new hero, or a returning player who is coming back to a Lore that has massively changed from what they remember, we've got something for you. So have a seat with us as we talk about our exciting plans for the year!

Repelling the Void Dragon Queen was once quite the challenge, but driving her away was far from the end. Her numerous brood is now one of the many dangers constantly threatening to cross over into Lore, and the time has come to end that threat!

However, the border reaches of the Void carry the cruel winds of a dangerous change, twisting a simple hunt into a dangerous conundrum. The edge of a forgotten promise looms closer, a reckoning many years in the making that has only grown sharper and darker as time passed. Unlock deeper secrets of the Void to face a menace unforgotten, carving your mark deeper into the history of a proud people! 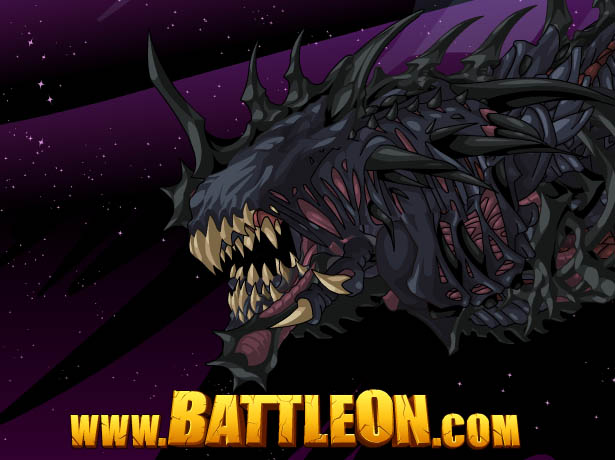 Spring Sales Event:
Get more Z-Tokens with each package until April 3rd during our Spring Sale! The larger the Z-Token Package you buy, the more bonus Z-Tokens you receive! 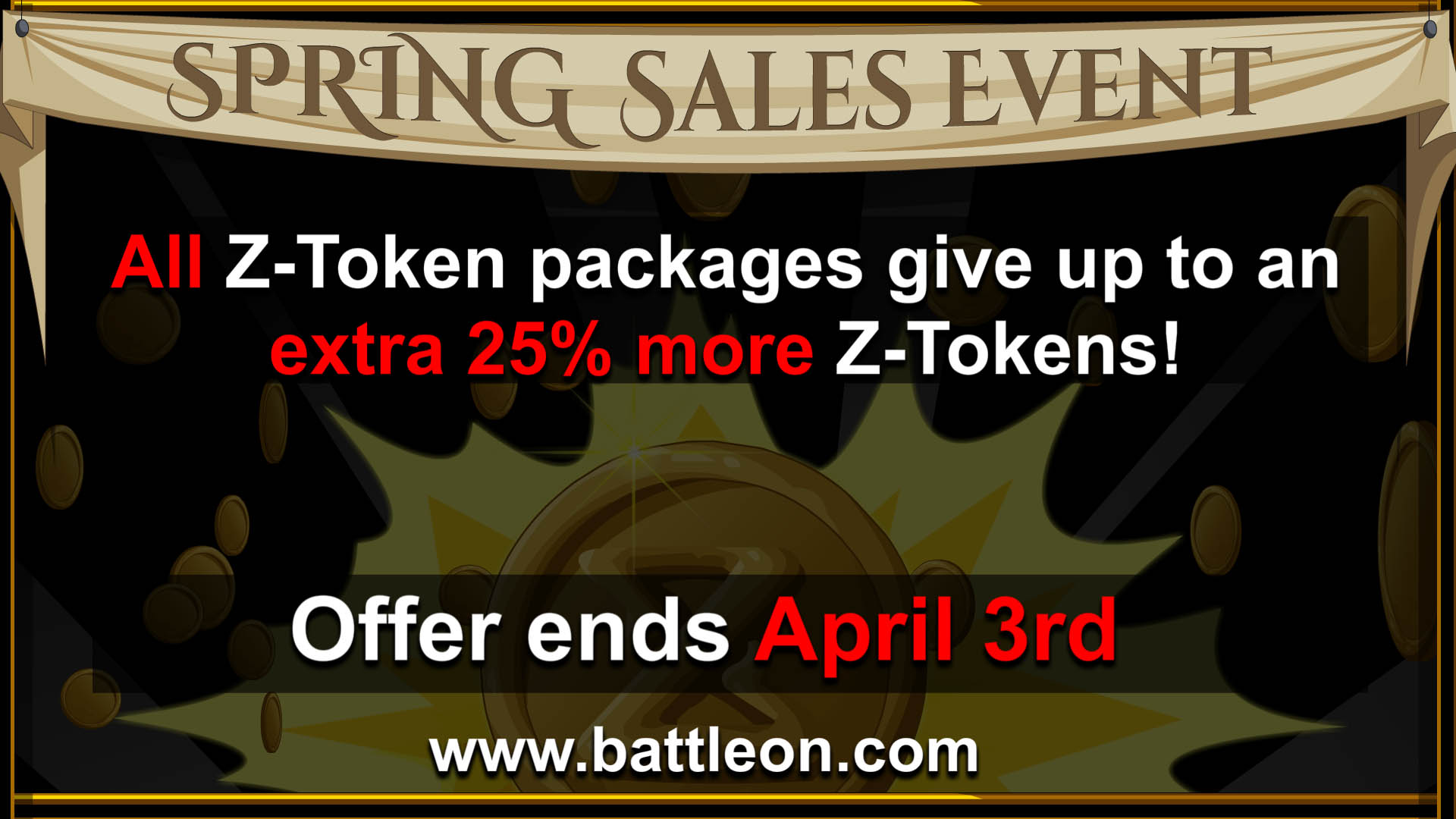 The following updates are now live: