As 2022 rolls along there are some exciting changes and updates planned for Adventure Quest! Some you have already seen with the huge shop system overhaul. Today we are going to discuss the future of classes, and more specifically plans for Archmage. But first I want to give a big Thank you! to Cray for his indefatigable wordsmithing helping to get this statement ready!

With the Paladin and Necromancer revamp releases out, these classes are largely complete. There are still fixes and balance changes that can always happen, but having a closed design process to look back and reflect upon gives us an opportunity to reflect on lessons learned, and how to proceed going forward.

In terms of the design process, while classes are essentially in their own separate set of rules within the game's balance, we've now established a solid place for the overall power of a Tier 3 class. We have a good progression from concept to theory and then implementation, although revisions still inevitably overlap with other releases.

We've also iterated on the quests and improved on the leveling process in a way that provides a solid structure to reuse for the future. However, as helpful as it is to have established the power ceiling early in terms of individual balance, populating this tier early has raised some major red flags in terms of design space and room for improvement of earlier tiers. It became clear that the order in which we were set to proceed was making it easier to design a class, but kicking the ball down the field on complications for future class plans and even early game/Quality of Life fixes.

This leads to some unfortunate bad news, but a lot of good news as we reveal the plans that make them necessary!

Off Comes The Bandaid

Unfortunately, it turns out that we're not quite ready to end the meme, and Archmage needs to be delayed one more time. However, rather than a nebulous delay, we have a concrete set of conditions to fulfill before we release it.

The project scope is set. The story is already worked out, and training in this class will involve both the guidance of familiar faces and a central class character whom you've known for a very long time, but may be surprised to see in this role.

Paladin and Necromancer had to be handled first in order to fulfill developer promises about the order in which Tier 3 classes would be revamped. Why change course, then, when we've been waiting for Archmage for such a long time? To make absolutely sure Archmage is good without throwing anything else under the bus to be good.

Archmage is now part of a wider project to revamp every class. This project has Archmage later in its order than planned to account for player feedback and the aforementioned concerns.

For starters, we were on the verge of releasing a third mage-adjacent class and leaving warriors waiting a total two or three years for a class of any tier that was dedicated or adjacent to their builds. All while rangers still effectively have no build identity, let alone an updated class. In addition, waiting for Archmage to revamp everything else was about to result in this T3 class cutting off design space for T1 and T2 ones, while the reverse was already happening due to the inconvenience of possibly addressing the problems with Imbue Lore without a full revamp. The cart was wedged in front of the horse in every possible way.

As part of said project, we have to make sure that each class is good by itself without excessive overlap - And a 20+ skill class makes for some mighty big toes to avoid stepping on.

Which leads us to the big questions, and the good news: Why are we considering design space overlap between class tiers with different level ranges, and just what are we up to that makes delaying Archmage (Again! GAH) not only worthwhile but necessary?

New Class Revamps and Master Class Armors
Tier 1 and 2 classes, as a core element of the game's progression, have been at the center of a number of discussions on necessary improvements to the overall experience. As they're severely outdated, it's only natural to want to see them redone to modern standards, strengthening the foundation of all classes.

However, most of our players would miss out on them, having already reached the level cap. The idea of fully scaling classes has been suggested, but has some major issues. While understandable in the sense of not wanting to miss out on new content by the unintentionally punishing notion of outleveling it, would be extremely bad for the game. Any single fully scaling class would dominate its respective element, making it virtually pointless to release non-class armors for it, and cut off design space for Tier 3 class skills. We'd have dozens of skills to avoid overlapping with when designing Archmage.

Going forward, the amount of skills per class will be set to 5 for Tier 1, 10 for Tier 2, and 20 for Tier 3. In addition, we still want the experience of mastering a class to give our high level players something to carry on to their level 130 and 150 adventures. Therefore, as part of a wider effort to renew the game's progression in a way that gives lower level characters an updated experience, we're incorporating a different proposal: Master class armors.

As each lower tier class is revamped, completing the new quests will unlock an exclusive high level shop. There you will find top level armors with a few skills at the appropriate power level, representing your status as a paragon of that class. For example, Dragonspine would have a Master Dracomancer armor with the capstone ability to permanently transform into a Half-Dragon.

We will begin this project this year, with the introduction of the tier 1 Archer* class and its corresponding Master armor. This will only be one step in fleshing out Ranger builds, as coverage for further tiers is also planned. That will allow us to proceed with Wizard and Archmage unburdened in the future, working our way up to the class without worrying about any excessive overlap between Archmage, Master Wizard, Master Mage, and Necromancer. Any other Tier 2 revamps that happen in the future will also benefit from the example of a clear progression from the first tier, to the final tier that Archmage will establish. This way, we're not only ensuring that Archmage can release in its best possible shape, but applying that to all classes, for players of all levels.


While the Archmage Class is planned for a later date, an untrained Archmage Armor will be added as one of the new rewards to the updated Squires of Order quest coming in early March! Once Mage and Wizard are revamped, we will finally put the wait to rest with the ultimate arcane expert class.

*At one time in early development, an Archer class was being worked on. This ancient relic from January 2005 was unearthed, but unfortunately it does not appear the class made it beyond a slight edit of the original Vampire Slayer. 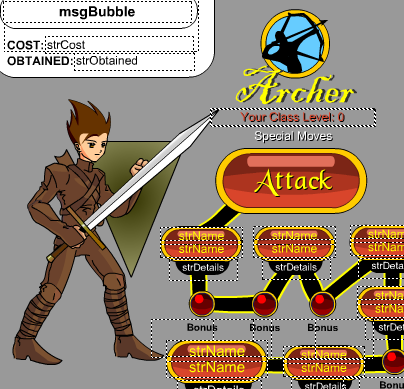